The proposed CAE building is located in the core of the La Part Dieu district, built on old military properties in the seventies to create a business centre connected to the train station of La Part Dieu and its network to the main French cities.

Today, this area of Lyon is part of a major renovation plan which includes redesigning public spaces and creating new public buildings, housing and offices. Old and obsolete existing buildings will be demolished to free up space for urban development such as the new Administrative Centre.

The new building site is marked by an existing alignment of trees that have been preserved throughout time. These trees and the ground on which they have grown are historical traces of the site and the district itself.

Snøhetta’s concept for the building is based on the will to preserve the trees and intend to build the exterior space around them to create a Green Heart. This heart will be the centre of gravity around which the spaces of the building will be organized.

The active base is visually connected to the outside through its two-floor high, glazed facades and the lobbies and the Green Heart are highly visible from the outside, giving a sense of openness towards the district of La Part Dieu.

The second layer gathers the office floors of the building. These floors are broken down into three main volumes laid out on both sides of the Green Heart and away from the facade of the neighbouring building of the shopping mall.

Providing natural light and outside spaces

This layout makes it possible to maximize access to natural light, open views towards the Green Heart and the city, and create outside spaces such as terraces and loggias. Furthermore, the fragmentation of the upper floors and the presence of vegetation reduce the visual impact of the building on the urban surroundings.

Inspired by the existing architecture of La Part Dieu

Therefore, the concept of enveloping the project is inspired by simple geometry shapes and repetitive façade modules characterizing the architecture of La Part Dieu. The facade is based on a regular structural grid on which repetitive modules are set. These modules, clad with anodized aluminium sheets, vary in shape and materiality to protect the interior spaces from the sun. The size of the windows within the modules are therefore different according to its location on the façade.

The variation of the materiality of the façade is also used to increase the perception of the Green Heart by using materials such as mirrored aluminium panels. In addition, it creates a sense of constant change of perception by playing with the colour of the vertical element of the modules, which changes according to the time of the day and the geometry of the module itself. 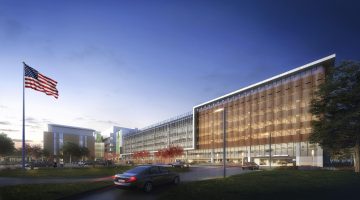 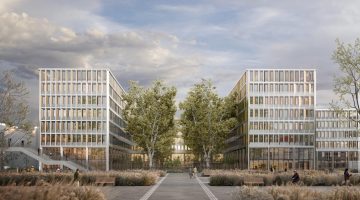 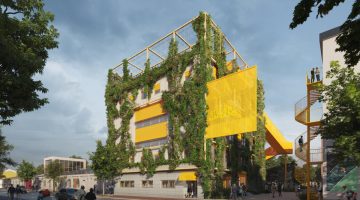