From New York magazine’s architecture critic, a walking and reading guide to New York City—a historical, cultural, architectural, and personal approach to seven neighborhoods throughout Manhattan, Brooklyn, and the Bronx, including six essays that help us understand the evolution of the city.

For nearly a decade, Pulitzer Prize–winning critic Justin Davidson has explained the ever-changing city of New York to his readers at New York magazine, introducing new buildings, interviewing architects, tracking the way the transforming urban landscape shapes who New Yorkers are. Now, his extensive, inspiring knowledge will be available to a wide audience. An insider’s guide to the architecture and planning of New York that includes maps, photographs, and original insights from the men and women who built the city and lived in it—its designers, visionaries, artists, writers—Magnetic City offers first-time visitors and lifelong residents a new way to see New York.

“A street-level celebration of New York City in all ‘its perpetual complexity and contradiction’ . . . a worthy companion to Alfred Kazin’s A Walker in the City and the American Institute of Architects guides to the architecture of New York as well as a treat for fans of the metropolis.”—Kirkus Reviews

"Justin Davidson does more than direct our feet to New York’s hidden monuments. He explains the structure of the city with a clarity that would be bracing even for a Gotham habitué, but more than that, he finds the meaning in every building and byway.”—Andrew Solomon, National Book Award-winning author of Far from the Tree

“For those of us who primarily work in the city, we leave home, take the most direct route to our place of employment, and rarely look up or down, just straight ahead. We don’t see the environment we live in. Magnetic City changed that for me. Now I don’t want to go to work. I want to read any chapter in Justin Davidson’s absorbing book and get my walking shoes on. Mr. Davidson’s exceptional knowledge of our beloved city is inspiring. Magnetic City is now my official chaperone.”—Patti LuPone 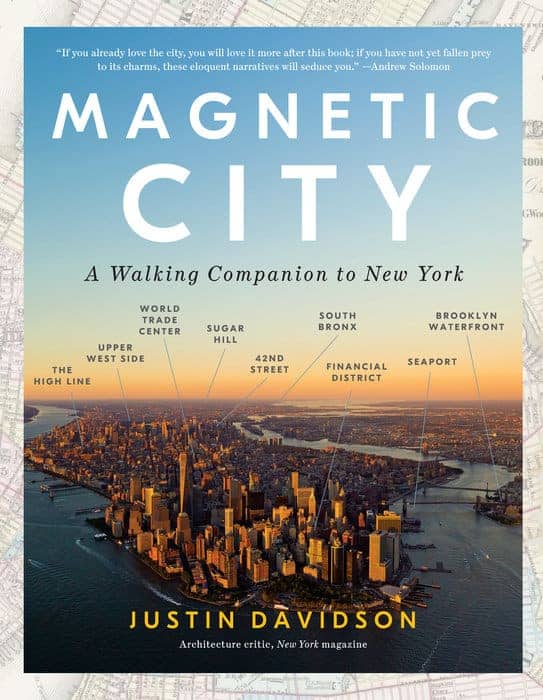